Australian Dollar softens mildly after RBA expands asset purchases by another AUD 100B. Also, it pledges to keep interest rate unchanged at current level until at least 2024. On the other hand, New Zealand Dollar and Canadian Dollar are the relatively stronger ones. But for now, both are capped below yesterday’s highs. Euro would be a focus as it continues to stay as weakest together with Swiss Franc. Dollar and Yen are mixed for now.

Technically, 1.2052 support is again in focus in EUR/USD. Break will the resume the correction from 1.2348. Correspondingly, EUR/JPY retreats sharply after failing 127.48 resistance. Break of 126.25 minor support will extend the consolidation pattern from 127.48 with another falling leg. 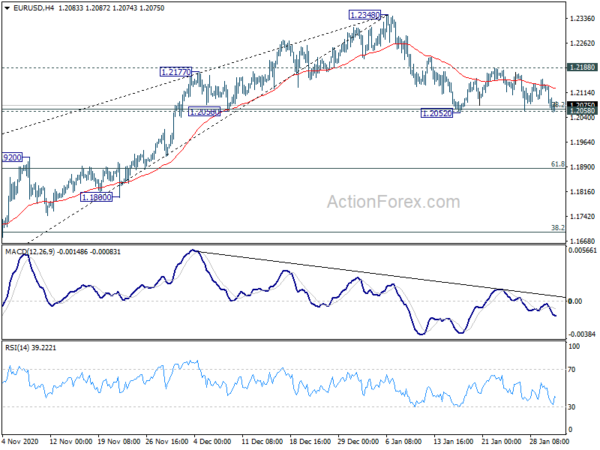 EUR/CAD is also eyes 1.5417 as the stronger than expected rebound from 1.5266 lost momentum. Break will signal return of weakness in EUR/CAD and bring retest of 1.5266 low. 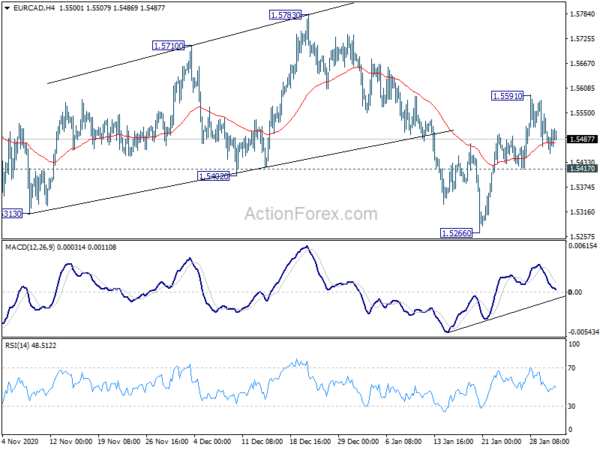 RBA kept cash rate target and 3-year AGB target unchanged at 0.10%. It announced to buy an additional AUD 100B of government bonds, including states and territories, after the current program completes in mid-April. The additional purchases will be held at current rate of AUD 5B per week. On forward guidance, RBA maintained the pledge that it ” will not increase the cash rate until actual inflation is sustainably within the 2 to 3 per cent target range”. It doesn’t expect the conditions to be met “until 2024 at earliest”.

SNB Jordan: Switzerland is anything but a currency manipulator

SNB Chairman Thomas Jordan said yesterday, at the moment, “foreign exchange interventions are very important because we have seen great pressure on the franc, especially in the COVID crisis.” Over CHF 100B was spent on intervention in the first nine months of 2020, to curb the surge in the safe haven currency.

“We have to … pursue a sensible monetary policy in the overall interest of the country,” Jordan added. “At the moment, unfortunately, that means that these interest rates are very low. As soon as possible, we will raise interest rates.”

Fed Rosengren: US still in the depths of a recession

Boston Fed Bank President Eric Rosengren said the US is “still in the depths of a recession” and he hoped, “over the course of the spring we’re really talking about a significant recovery.”

“The first thing we can do is do everything in our power to get back to full employment as quickly as possible,” he added.” “I don’t want to say that the burden is all on monetary policy. Most of the burden is actually on fiscal policy when interest rates are as low as they are.”

Fed Bostic: This recession was unlikely anything we had before

Atlanta Fed President Raphael Bostic said “this recession was unlike anything we ever had before, so the recovery is going to be that way as well”. As for the way out there in 2023, 2024, ” there’s a lot that’s going to happen that could go one way or another.”

“A lot of the recent developments have been positive,” he added. “We should be open to the possibility that things might happen more strongly than they would otherwise.”

Still, Bostic was not worrying about price pressures. “It’s not really the level of inflation but much more the trajectory as we move forward that I’m going to be focusing on to get answers of whether the economy might be moving into places that make me uncomfortable,” he said.

Minneapolis Fed President Neel Kashkari said he’s “not concerned” about the massive fiscal stimulus response to the pandemic as “this is like wartime spending”. The US has the “capacity to do what we need to do” with more government borrowing.

“The key now is for the Federal Reserve to keep our foot on the monetary policy gas until we really have achieved maximum employment as we call it,” Kashkari added. “And I think it’s going to be important for Congress to continue to be aggressive supporting people who have been laid off, supporting small businesses until we really get the pandemic behind us and restore the economy.”

France CPI and Italy GDP will be featured in European session. But main focus will be on Eurozone GDP.

No change in AUD/USD’s outlook. Correction from 0.7819 is still in progress. Deeper fall would be seen to 38.2% retracement of 0.6991 to 0.7819 at 0.7503. Strong support should be seen around there to bring rebound. On the upside, break of 0.7762 minor resistance will argue that the correction has completed. Intraday bias will be turned back to the upside for retesting 0.7819 high. 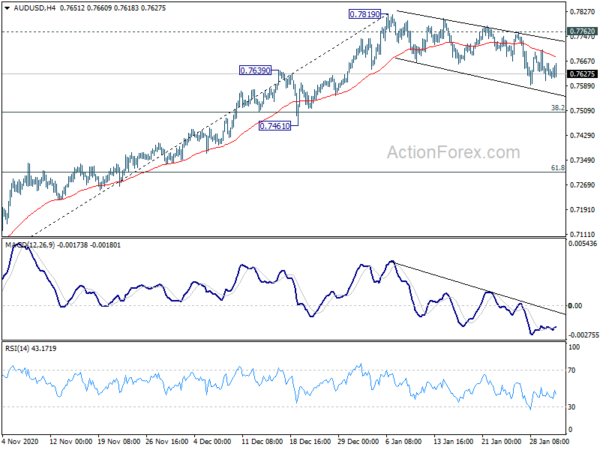 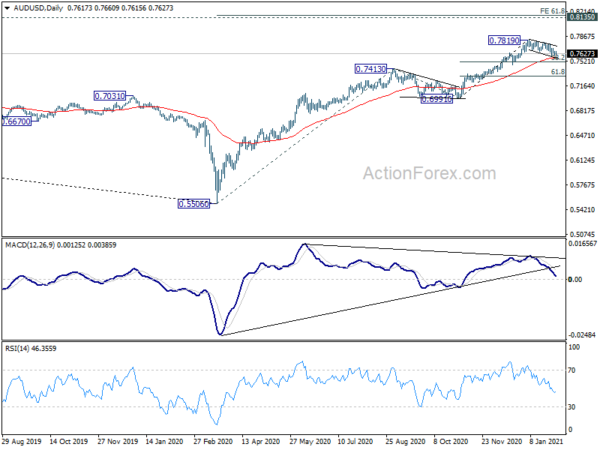