Yen and Dollar surged strongly overnight, but lost some momentum after on stocks recovered from initial steep selloff. Both are still firm with Asian markets in risk aversion mode. Canadian Dollar is currently the worst performing for the week, followed by Aussie. Focus will now turn to FOMC minutes for guidance on the next moves, in stocks, yields, and currencies.

Technically, while the greenback jumped, some key near term levels remain intact for now. The levels include 1.1806 support in EUR/USD, 1.3730 support in GBP/USD, 0.7443 support in AUD/USD and 0.9273 resistance in USD/CHF. USD/CAD did breach 1.2485 resistance but there is no follow through buying yet. Additionally, Gold appears to have bottomed for the near term at 1750.49, on bullish convergence condition in 4 hour MACD, after breaking 1794.75 resistance. Dollar’s weakness could still come back any time. 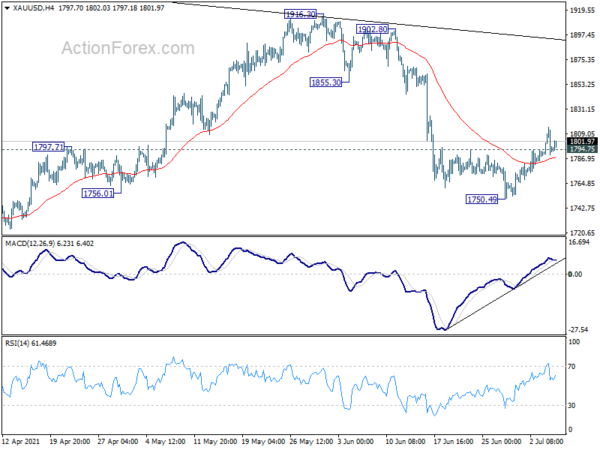 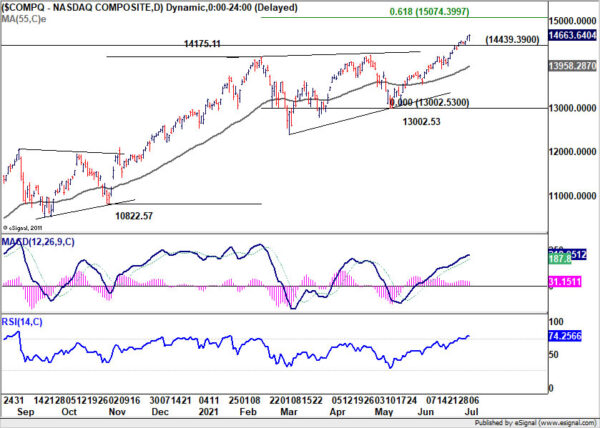 US 10-year yield dropped sharply overnight, by -0.061 to close at 1.370, hitting the lowest level since February. Some analysts noted that the move reflected believes that inflation in the US, and even the strong growth, were transitory only. The move also came in tandem with notable pull back in major stock indexes. Focuses will now turn to FOMC minutes for more guidance.

The speed of the fall in TNX was a surprise, even though the direction isn’t. Prior rejection by 55 day EMA already hinted that corrective pattern from 1.765 would more likely extend lower than not. For the moment, we’d expect strong support 38.2% retracement of 0.504 to 1.765 at 1.283 to contain downside and bring rebound. In other words, there is room for further decline in the near term, but downside is relatively limited. 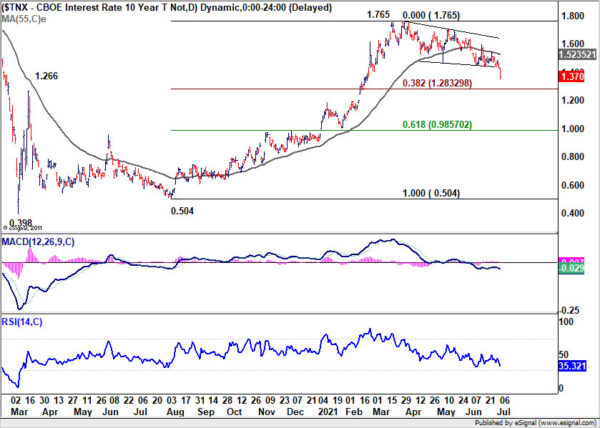 Ai Group Chief Executive, Innes Willox, said: “Some adverse impacts on demand and supply chains were associated with the COVID lockdowns and restrictions imposed by other states and territories. Businesses were also constrained by an inability to fill positions required either to maintain existing levels of activity or to expand to meet higher demand. Wages growth accelerated in June and input prices continued to rise although at a more moderate rate than in the previous month. The healthy rise in new orders came on top of the sharp rise in the previous month and points to strong demand over coming months. A key question for many businesses will be whether they can fill positions required to fill these orders.”

Japan leading economic index dropped to 102.6 in May, down from 103.8, below expectation of 103.5. Germany industrial production, France trade balance, Italy retail sales and Swiss foreign currency reserves will be released in European session. Later in the day, Canada will release Ivey PMI and US will publish FOMC minutes.

GBP/USD dropped notably after failing to sustain above 4 hour 55 EMA, but downside is contained well above 1.3730 support. Intraday bias remains neutral for the moment. On the upside, break of 1.4000 resistance will argue that fall from 1.4248 has completed. Intraday bias will be turned back to the upside for retesting 1.4240/8 resistance zone. On the downside, break of 1.3730 support will resume the fall from 1.4248, as the third leg of the consolidation pattern from 1.4240, to 1.3668 support and possibly below. 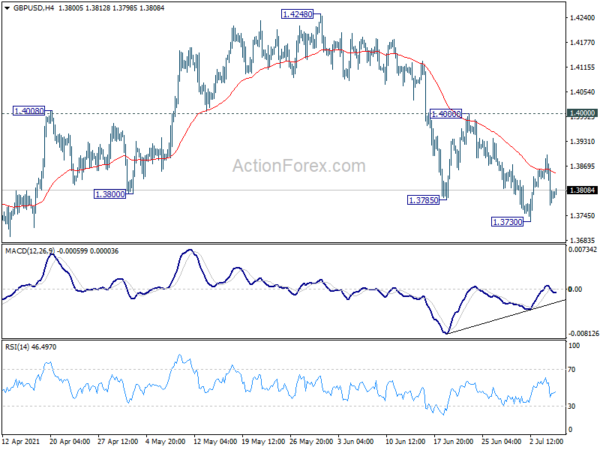 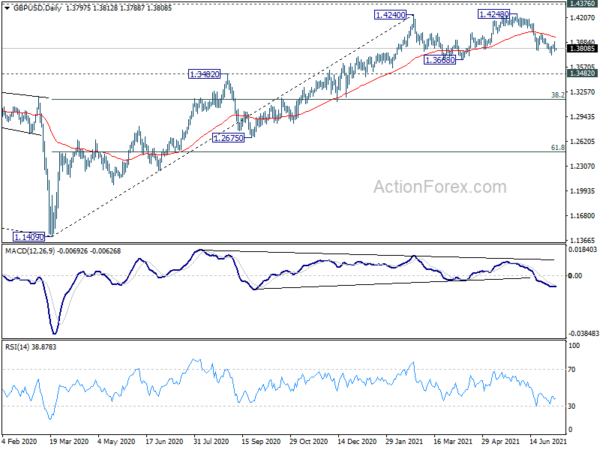