Markets are mixed in a quiet Asian session today, with little reaction to China’s trade data. Dollar is consolidating last week’s late lost but there is no apparent momentum for a rebound. On the other hand, Yen is mildly higher on sluggish stock markets in the region. Gold is struggling below 1900 handle as the current rebound loses some upside momentum. WTI crude oil also retreats just head of 70 handle.

Technically, 109.32 support in USD/JPY will be a focus for today. Break there will suggest completion of choppy rebound from 107.47. Deeper fall would then be seen to 108.55 support and below. The could be accompanied by more broad based selloff in Dollar, or Yen crosses, or both. 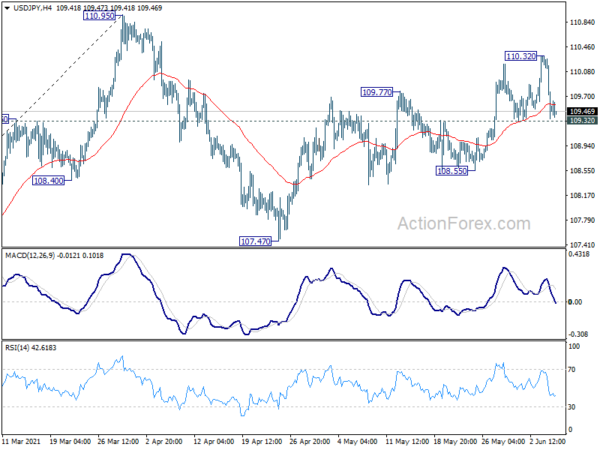 S&P Global Ratings maintained Australia’s sovereign rating at AAA, and up graded the outlook from “negative” to “stable”. It said, “the government’s policy response and strong economic rebound have reduced downside risks to our economic and fiscal outlook for Australia.”

“We expect the budget to be supported by steady revenue growth, aided by robust commodity prices and expenditure restraint,” the agency added. “We believe Australia’s external accounts are likely to remain stronger than in the past and be resilient during potential crises.”

Australian Treasurer Josh Frydenberg welcomed the upgrade in the outlook outlook. He described that as a “resounding expression of confidence” in the government’s policies.

Australia AiG Performance of Services Index rose 0.2 pts to 61.2 in May. That’s the highest monthly result since October 2003, indicating a stronger expansion. Four of the five services sectors indicated expansion while the other was broadly stable. Four of the five activity indicators, sales, ne orders, employment and deliveries, showed positive results.

Ai Group Chief Executive, Innes Willox, said: “Australia’s services sector maintained its momentum in May…. With existing capacity well utilised, and with reports of labour shortages becoming more common, conditions were in place for a substantial lift in investment in the sector.”

US Yellen: Higher interest rate environment is a plus for society and Fed

US Treasury Janet Yellen said in a Bloomberg interview that the USD 4T spending plan would be good even if it results in higher inflation and interest rates. “If we ended up with a slightly higher interest rate environment it would actually be a plus for society’s point of view and the Fed’s point of view,” she added.

“We’ve been fighting inflation that’s too low and interest rates that are too low now for a decade,” the former Federal Reserve chair said, adding that “we want them to go back to” a normal interest rate environment, “and if this helps a little bit to alleviate things then that’s not a bad thing — that’s a good thing.”

BoC and ECB to meet this week

Two central banks will meet this week. BoC is generally expected to keep monetary policy unchanged. Back in April, BoC has tapered its weekly bond purchases from CAD 4B to CAD 3B already. While the economic outlook since then appeared to improved further, the central bank will refrain from have any changes for now. Also, it would maintain the indication interest rate could be lifted in second half of next year, not earlier.

ECB will keep the policy rates unchanged this week for sure. The biggest question is what the Governing Council would do after significantly stepped up the pace of asset purchases this quarter. For now, it looks premature for the central bank to taper the purchases, given that the economy is still not totally out of the pandemic. Also, treasury yields look rather ready for a rise if ECB does indicate allowing them to rise. But any hints that ECB is ready to taper could give Euro a strong lift. 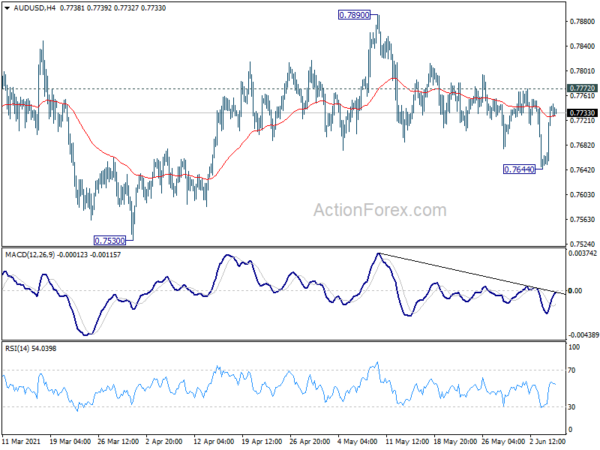 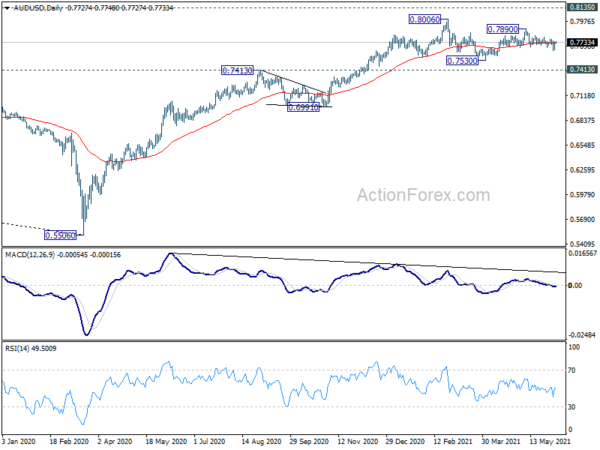 Dollar Consolidating Losses, But No Momentum for Recovery

Yen Stronger With Aussie and Kiwi in Mixed Trading