Dollar surges in early US session as boosted by stronger than expected inflation readings. Indeed, the core PCE inflation hit the highest level since 1991. With the current buying momentum, the greenback is likely to end the week on a high note, with prospect of closing as the strongest. On the other hand, commodity currencies are in rather steep decline, even the Kiwi. But Yen is more likely to end the week as the worst performer.

Technically, EUR/USD’s break of 1.2160 support indicates short term topping, deeper fall could now be seen back to 1.1985 support. Next focus will be 0.9046 resistance in USD/CHF and break there should confirm short term bottoming at 0.8929. Meanwhile, USD/JPY is on track to retest 110.95 high.

Also released, goods trade deficit narrowed to USD -85.2B in April, versus expectation of USD -92.0B.

ECB Executive Board member Isabel Schnabel “rising yields are a natural development at a turning point in the recovery – investors become more optimistic, inflation expectations rise and, as a result, nominal yields go up.” “This is precisely what we would expect and what we want to see,” she said. Also, “financing conditions remain favorable.”

“We always have to be willing to reduce or increase asset purchases in line with our promise to keep euro area financing conditions favorable,” she added. “The recovery still depends on continued policy support. A premature withdrawal of either fiscal or monetary support would be a great mistake,”

“It’s likely that when the PEPP ends, we will not have reached our (inflation target),” Schnabel said. “In that case, we will continue to run a highly accommodative monetary policy also after the PEPP.”

Eurozone Economic Sentiment Indicator rose strongly to 114.5 in May, up from 110.5, above expectation of 112.1. The index scored markedly above its long-term average and pre-pandemic level. It was close to December 2017 peak. Employment Expectations Indicator rose 2.9 pts to 110.1.

Swiss KOF economic barometer rose to 143.2 in May, up from 136.4. KOF said, “the outlook for the Swiss economy for the middle of 2021 can be regarded as very positive, provided that the containment of the virus continues to progress.”

KOF added: “The sharp increase is driven by bundles of indicators from the manufacturing sector and foreign demand. An additional positive signal is sent by indicators for accommodation and food service activities followed by indicators for the other services sector. By contrast, slight negative impulses are sent by private consumption.” 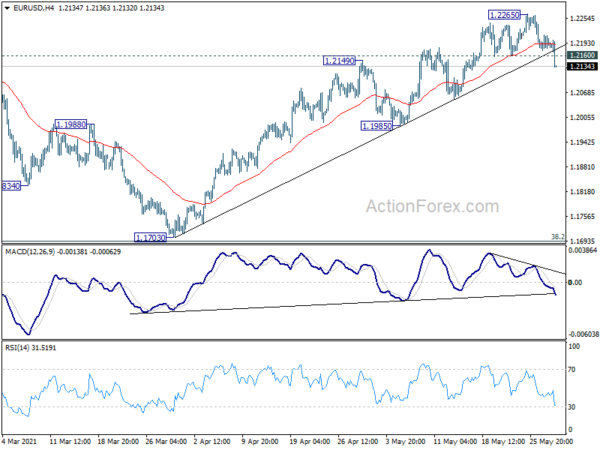 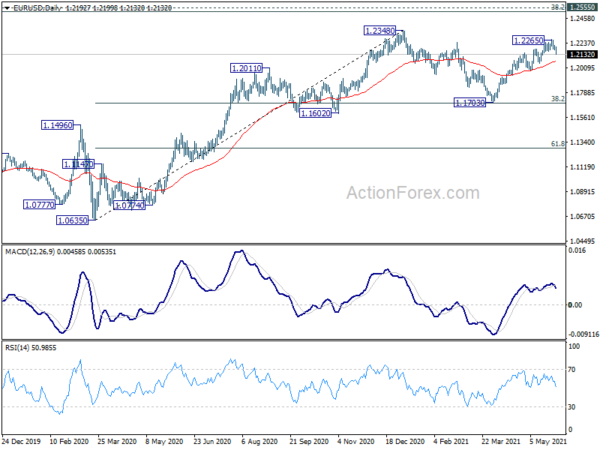