Asian markets are staying in full risk on mode, except China, following the record runs in US overnight. However, this time, Dollar is not facing much selling pressure, but recovered instead. The reflation trade and strong rally in treasury yield might finally start to give the greenback a floor. Still, Dollar will need to face the test of non-farm payroll report today first, as well as the reactions to the data. For now, Yen is the worst performing one for the week, followed by Sterling and then Dollar. New Zealand Dollar is the best performing, followed by Australian and then Euro. The positions could still change.

Technically, EUR/JPY’s break of 127.22 resistance is seen more as a weakness in Yen. That’s accompanied by breach of 103.89 resistance in USD/JPY. A question is on whether the overall development could transform into a more sustainable rebound in Dollar. Levels to watch will include 1.2214 support in EUR/USD and 0.8918 resistance in USD/CHF. 1900.68 temporary low in Gold could provide another indication too. 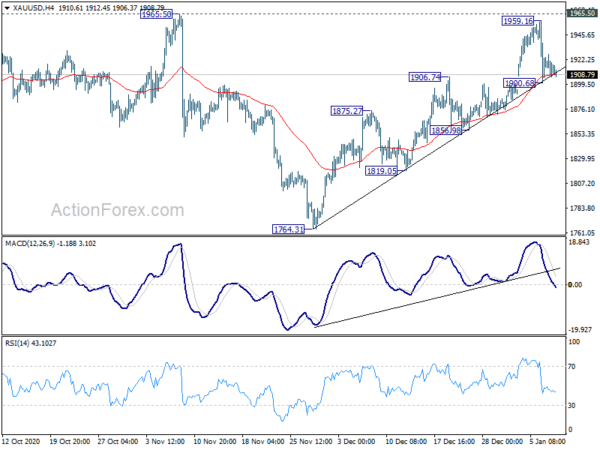 NASDAQ back in driving seat, closed at new record high

There are two things to pay attention to in NASDAQ. Firstly, it’s the reaction to near term channel resistance. Secondly, it’s whether daily MACD would bend upwards through prior high made last September. Both would indicate whether NASDAQ is re-accelerating and set the stage through above mentioned 14186.12 projection level.

Non-farm payrolls will more likely disappoint then not

Looking at related indicators, ISM manufacturing employment turned back into expansion at 51.5 in December, up from 48.4. ISM Services employment, however, dropped back to contraction at 48.2, down from 51.5. ADP employment showed a contraction of -123k jobs. Four-week moving average of initial jobless claims rose nearly 100k to 837k.

The NFP result will more likely disappoint market expectations than not. Nevertheless, traders could still look through the set of “old” data to the policies of the new administration. A focus would be on whether 10-year yield could extend this week’s powerful rally, and whether that could help set up a sustainable Dollar rebound.

Fed Bullard: Health crisis will wane in the months ahead

St Louis Fed President James Bullard said in a presentation that “early arrival of vaccines suggests the health crisis will wane in the months ahead”. With vaccine distribution directed towards the most vulnerable, fatalities would also decline. Additionally, business have already learned to “produce at normal levels despite health restrictions”, contributing to rapid economic growth.

“Market-based inflation expectations have recovered from lows reached during March 2020,”he added. “TIPS-based breakeven inflation, based on CPI inflation measures, could move considerably higher and still be consistent with a PCE inflation outcome modestly above the 2% target.”

Bullard also told reporters, “the ingredients for higher inflation are in place”, with “very powerful fiscal policy”, a Fed that “wants to temporarily have inflation above target”, and the “economy poised to boom at the end of the pandemic”

Fed Barkin: Second half to be robust as businesses pull the trigger

Richmond Fed President Thomas Barkin said with initial slow vaccine distribution. a full return to normal “won’t be until sometime this summer at best”. Though, “I expect the second half of the year to be robust as businesses finally pull the trigger and return to the workplace and consumers with elevated savings unlock pent-up demand,” he added.

Barkin also noted, “I am encouraged to see the rise in market indicators of inflation expectations. … That is what we are trying to support”. Recent rise in bond yields was part of a “reflation trade”, as investors were pricing in future rise in prices.

Fed Evans: Probably going to be 2024 before interest rate hike

Chicago Fed President Charles Evans said, it’s “probably going to be 2024 before we see interest rates start to rise,: That would come with “continuations of labor market improvement, unemployment falling to 4% and hopefully below that”

At that point, he said, “we can start to gently increase the federal funds rate, while it will still be accommodative in order to sort of achieve this overshooting and average 2% (inflation).”

USD/CHF’s recovery from 0.8756 extends higher today but stays below 0.8918 resistance. Intraday bias remains neutral first and another is still in favor. Break of 0.8756 will resume larger down trend to long term projection level at 0.8639. However, sustained break of 0.8918 will indicate short term bottoming, on bullish convergence condition in 4 hour MACD, after missing 61.8% projection of 0.9901 to 0.8998 from 0.9304 at 0.8746. Intraday bias will be turned back to the upside for stronger rebound, back towards 0.8998 support turned resistance. 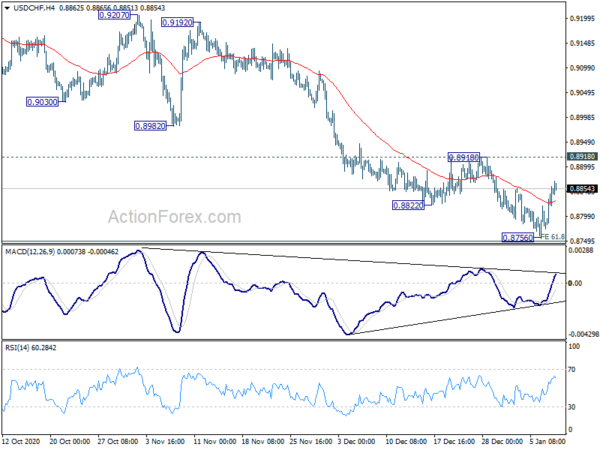 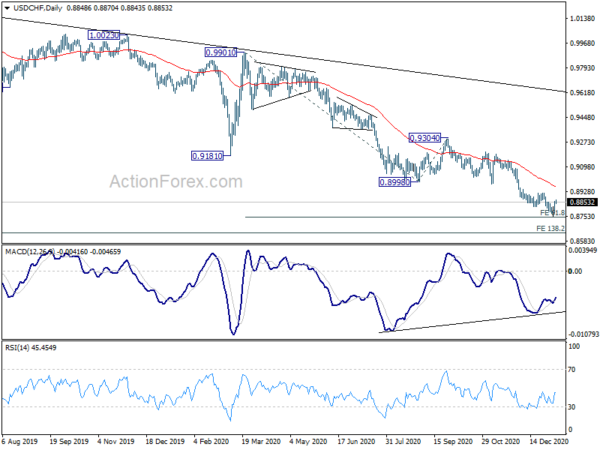 Dollar Weakens Against on Job Contraction, Downside Limited So Far

Dollar Firms Up Slightly after CPI, But No Follow Through Buying Yet