The financial markets continue to be range bound today, as traders seem to be holding their bets before Friday’s US job report. Dollar is recovering mildly but it’s held below next term resistance levels. Sterling is currently the stronger one, while Swiss France is the weakest.

Technically, we’re still staying near term bearish on the Dollar in general despite today’s recovery. Key levels to watch include 1.4090 support in GBP/USD, 0.7673 support in AUD/USD, 0.9046 resistance in USD/CHF and 1.2201 resistance in USD/CAD. As long as these levels whole, the next committed move in the greenback is more likely down than up.

ECB President Christine Lagarde said in an annual review that “the euro remains unchallenged as the second most widely used currency globally after the US dollar”. Share of Euro across various indicators of international currency was stable, averaging around 19% in 2020.

The relative resilience of the international role of the euro despite the pandemic shock stands in contrast to the significant decline observed in the wake of the euro area sovereign debt crisis. “To some extent, this development may reflect the effectiveness of the unprecedented policy support measures and coordinated approach that have prevailed in the euro area during the COVID-19 crisis,” said Lagarde.

On the topic of digital currency, Executive Board member Fabio Panetta said, “depending on its design, a central bank digital currency may support the use of a currency in cross-border payments. However, fundamental forces, such as the quality of economic policies and institutions, as well as the depth of markets, remain the most important factors for international currency status.”

Eurozone PPI came in at 1.0% mom, 7.6% yoy in April, above expectation of 0.9% mom, 7.3% yoy. For the month, industrial producer prices in the Eurozone increased by 1.8% for intermediate goods, by 1.0% in the energy sector, by 0.5% for non-durable consumer goods, by 0.4% for durable consumer goods and by 0.3% for capital goods. Prices in total industry excluding energy increased by 0.9%.

BoJ Adachi: Post-pandemic era may give a prime opportunity to achieve inflation target

BoJ board member Seiji Adachi said in a speech, “the post-COVID-19 phase may be an opportunity for the services industry to raise the prices of their services while improving their quality.”

“As Japan’s past deflationary phase is characterized by the fact that there were almost no price rises in the domestic demand-oriented services industry, the post-COVID-19 era may afford a prime opportunity to achieve the 2 percent price stability target,” he added.

Australia GDP grew 1.8% qoq in Q1, above expectation of 1.1% qoq. Through the year, GDP rose 1.1%. Head of National Accounts at the ABS, Michael Smedes said: “With 1.8% growth in the March quarter 2021, Australian economic activity has recovered to be above pre-pandemic levels and has grown 1.1% through the year.”

RBNZ Head of Financial Markets Vanessa Rayner said in speech, “unconventional” monetary policy tools will “likely remain mainstream for as long as global central bank policy rates remain at, or near record lows”. With the OCR at current low level, RBNZ has “less space” to cut interest rates further. Also, there’s a “limit to how negative rates can go before causing adverse side effects”.

Range trading continues in GBP/USD and intraday bias remains neutral. With 1.4090 support intact, further rise is still expected. On the upside, sustained break of 1.4240 will resume larger up trend from 1.1409. Next target is 1.4376 long term resistance. On the downside, however, break of 1.4090 support will extend the consolidation from 1.4240 with another falling leg. Intraday bias will be turned back to the downside for 1.4008 resistance turned support first. 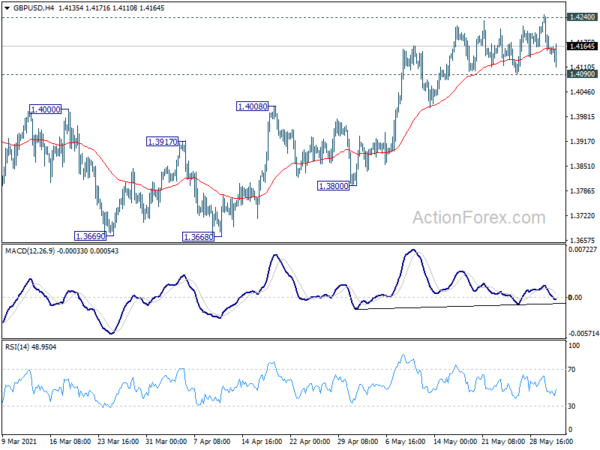 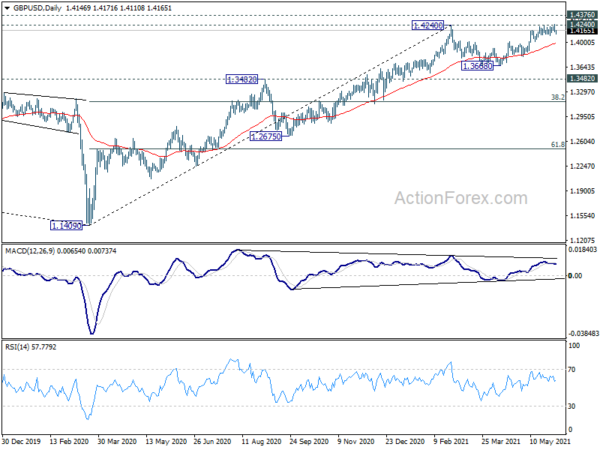 Dollar Recovers in Range Bound Markets, No Breakout Yet