The financial markets are generally steady today as traders are holding their bet ahead of FOMC announcement. US President Joe Biden is set to unveil a USD 1.8T package for family and education, but that’s unlikely to trigger much reaction. New Zealand Dollar and Canadian Dollar are currently the strongest ones for today, followed by Dollar. Australian Dollar remains the worst performing one after post CPI sell-off. Sterling is also weak together with Yen.

Technically, we’re staying near term bearish on Dollar, except versus Yen. This view will hold as long as 1.1992 minor support in EUR/USD, 0.7676 minor support in EUR/USD, 0.9121 minor resistance in USD/CHF and 1.2470 minor resistance in USD/CAD holds. Also, there is also prospect for Gold to rebound from current level to resume the rise from 1676.65 through 1797.71. However, Firm break of 1763.36 will be taken as an early indication of a stronger Dollar rebound. 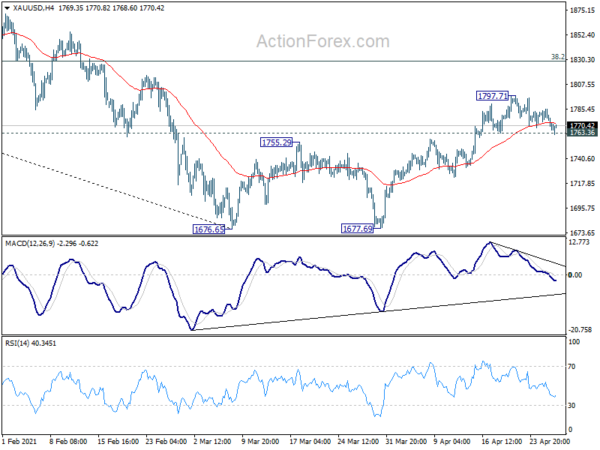 Here are some previews for FOMC:

US goods trade deficit widened to USD 90.6B in March

Statistics Canada also estimated that retail sales would increase 2.3% mom in March. But owing to its preliminary nature, this figure will be revised.

German Gfk consumer sentiment dropped to -8.8, consumption not a pillar of the economy this year

Rolf Burkl, GfK consumer expert comments on the subject: “The recovery of the domestic economy will continue to lag due to the third wave. As in 2020, consumption will again not be a pillar of the economy this year. In the years before the pandemic, private consumer spending had still made an important contribution to the growth of the German economy.”

From Swiss, Credit Suisse Economic Expectations rose slightly to 68.3 in April, up from 66.7.

Head of Prices Statistics at the ABS, Michelle Marquardt said: “Higher fuel prices, compared with the low prices seen in 2020, accounted for much of the rise in the March quarter CPI.”

EUR/USD is staying in consolidation from 1.2116 temporary top and intraday bias remains neutral first. Further rise is expected with 1.1992 support intact. Break of 1.2116 will resume the rise from 1.1703 for retesting 1.2242/2348 resistance zone. On the downside, though, break of 1.1992, will turn bias to the downside for deeper pull back. 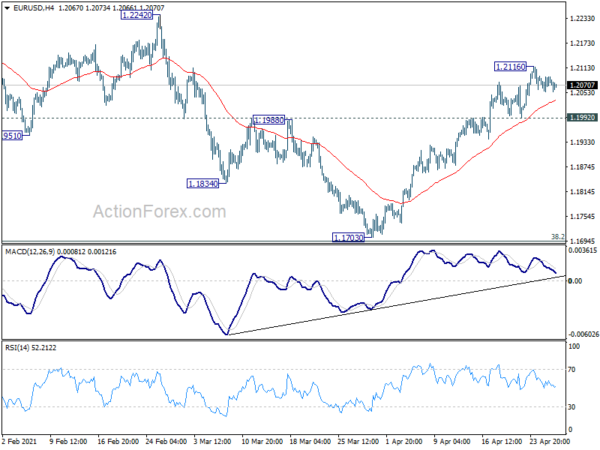 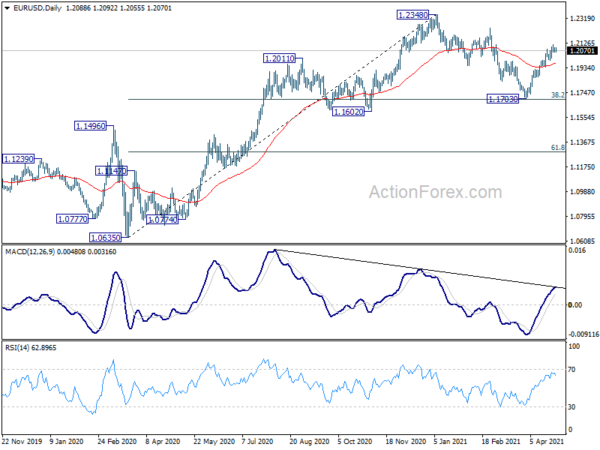 Euro Falls Against Commodity Currencies, Dollar Mixed Despite Pull Back in Yields