Dollar’s selloff continues in early US session and it’s extending after weaker than expected core CPI reading. Sterling is lifted by strength in UK yield today, with 10-year Gilt yield hitting as high as 0.494 so far. It could try to take on a pre-pandemic floor of around 0.50%. Currency markets are relatively mixed elsewhere, with notable resilience seen in Swiss Franc, but not in Yen. Commodity currencies are and Euro are firm but there is no impulsive follow through buying for now.

Technically, GBP/JPY’s rally extends after brief consolidations and hits as high as 145.04 sofar. It’s on track to 147.95 key medium term resistance. A focus would be on 0.8737 temporary low in EUR/GBP. Break will pave the way to 0.8670 support, and affirm the Pound’s broad based strength.

ECB Panetta: Innovations not well designed can become a source of financial disruption

ECB Executive Board member Fabio Panetta said in a speech that “a digital euro represents a natural evolution in response to this transformation – not only to underpin efficiency and innovation, but also to preserve the role of the central bank in offering safe means of payment”.

A key goal of digital euro should “should therefore be to preserve a fine balance between sovereign and private money to ensure payments remain stable and efficient.” However, “if innovations in central bank money are not well designed, they can become a source of financial disruption.”

Panetta added that ECB will publish the consultation replies on digital euro in the spring. That would provided the input to the decision on, towards the middle of the year, about whether or not to formally launch a digital euro preparation project.

BoJ board member Toyoaki Nakamura said the March policy review will seek ways to make the easing framework more “effective” and “sustainable”. The review will also looking into whether the asset purchases and various tools are “exerting intended effects”.

Nakamura maintained that ETF purchases “will remain a necessary tool” to eradicate the deflationary mindset”. But “this is not just about ETFs but by buying huge amounts of assets and holding onto them for a prolonged period, the BOJ could affect market functions. That is something we need to be mindful of”.

Australia Westpac consumer sentiment rose 1.9% to 109.1 in February. The index hit a 10-year high at 112.0 in December, then retreated to 107.0 in January. February’s bound-back “signals that consumer remains extraordinarily confident”, noted Westpac.

Westpac said RBA’s move to extend the QE program by AUD 100B in February, not in March, “emphasises the Board’s commitment to providing as much support as necessary to assist the economy in closing the output gap that has opened up during the pandemic.”

It expects further extensions of QE after RBA’s next program completes in October. 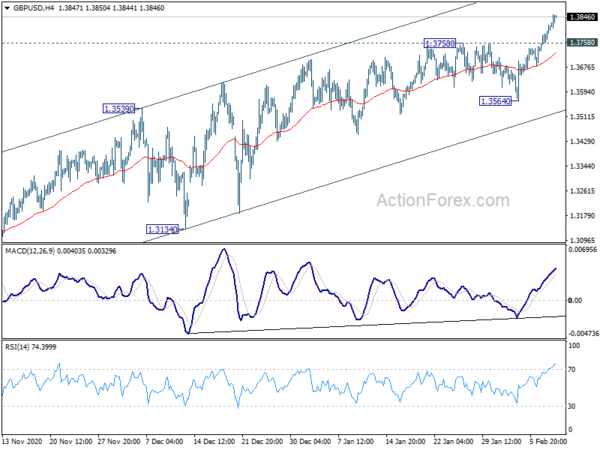 In the bigger picture, rise from 1.1409 medium term bottom is in progress. Further rally would be seen to 1.4376 resistance and above. Decisive break there will carry larger bullish implications and open the case of long term up trend. On the downside, break of 1.2675 support is needed to indicate completion of the rise. Otherwise, outlook will stay cautiously bullish even in case of deep pullback. 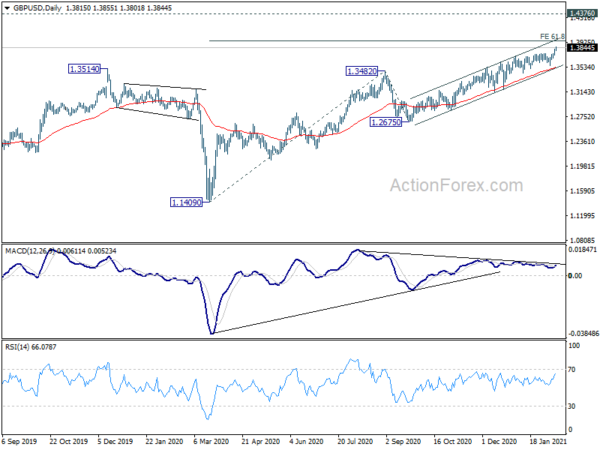