Sterling rises strongly today, and overpowers Australia and New Zealand Dollar. On the other hand, Yen’s selloff continues while Dollar is following closely behind. Despite strong investor confidence data, Euro is indeed under heavy selling pressure against the Pound and Aussie. Comments from ECB chief economist Philip Lane suggests that the central bank is still open to increase the asset purchase pace in next quarter, depending on market situations.

ECB Lane: We can increase or decrease our asset purchases after June

In an interview by Le Monde, ECB chief economist Philip Lane said that “from now on, the economy will be growing quickly, but from a subdued level”. Eurozone will only get back to its 2019 GDP level “around this time next year”. Unemployment rate will only fall back to 2019 levels “in 2023”. Hence, “it’s a long journey”, which still requires “sustained” fiscal and monetary efforts.

Lane also said that despite the increases in some Eurozone bond yields, they “remain relatively low and anchored”. He reiterated ECB’s commitment to “maintain favorable financing conditions”. The “significantly” higher level of asset purchases announced in March will continue over the coming weeks. The pace of purchases will be reviewed at the June meeting. He added, “we can increase or decrease our purchases depending on what is necessary to keep financing conditions favorable.”

Eurozone Sentix investor confidence rose to 21.0, but there are increasing signs of being overstimulated

Eurozone Sentix Investor Confidence rose sharply to 21.0 in May, up from 13.1, well above expectation of 14.0. That’s also the highest level since March 2018. Current situation index turned positive from -6.5 to 6.3, highest since May 2019. Expectations index rose from 34.8 to 36.8, hitting another record high.

Sentix said: ‘This is very unusual and underlines that the very expansive monetary and fiscal policy that has been in place for a year has not failed to have an effect on the real economy.” Though it also warned, “there are increasing signs that the economy is being overstimulated. This is evident in individual sectors that report shortages of materials. However, the strong global economy is having an even stronger impact on commodity prices and thus on inflation.”

“It looks like we have moved past the rebound phase of the recovery and are now seeing healthy growth in most of the economy. After lagging in the rebound phase, the services sectors are now showing strength. Retail continues to see healthy conditions but does have slightly softer confidence than the other industries suggesting less improvement from the already high level in conditions”.

Overall, retail sales volume dropped -0.5% in March quarter. James said: “The quarterly volume fall was driven by households spending patterns gradually returning to those seen before COVID-19. Food retailing (-2.7 per cent) led the falls while household goods also fell (-1.6 per cent). The falls were partially offset by a rise in cafes, restaurants and takeaways (5.8 per cent), as eating out increased, while functions and events continued to return.”

Bitcoin retreated to 52960 last week but set a base there. Rebound from 47112 resumes today and is now heading back to 60k handle or above. Still, we’d continue to view current rise as the second leg of the medium term corrective pattern from 64848 high only. Hence, bitcoin should start to feel heavy as it approaches this resistance, which shouldn’t be taken out decisively. 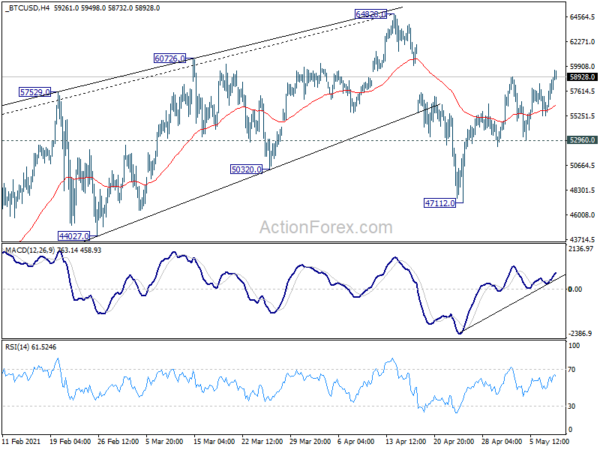 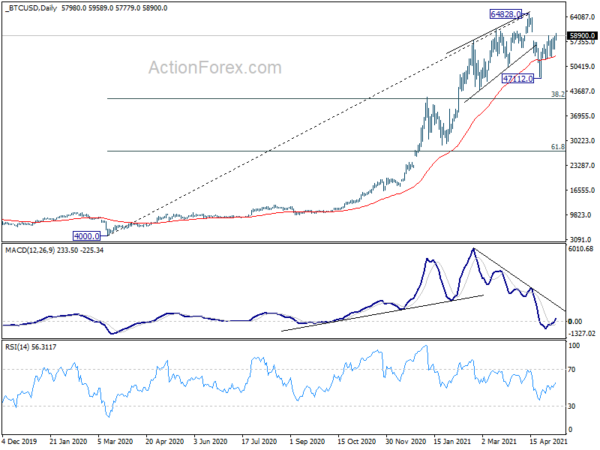 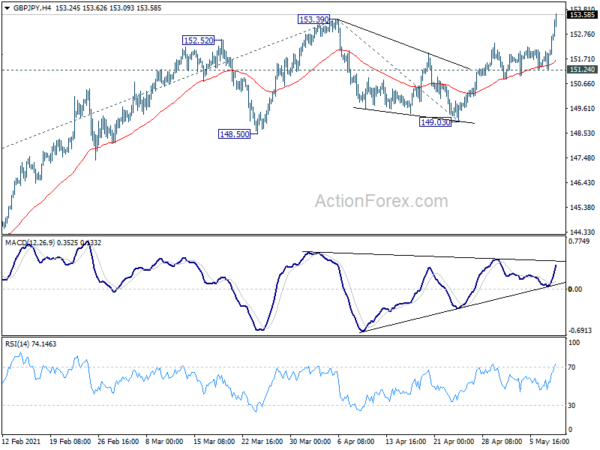 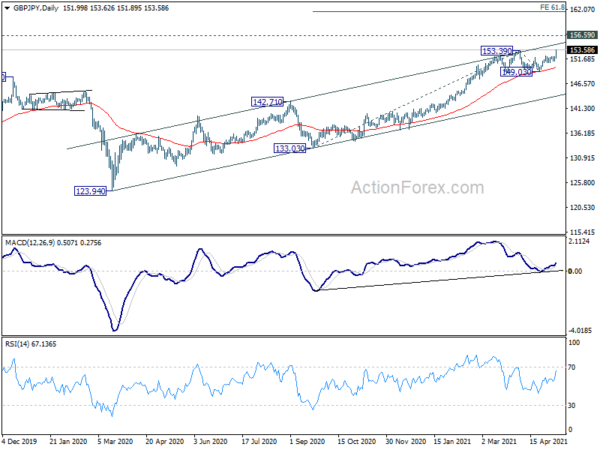