Dollar and Yen are both recapturing some ground as risk appetite cools slightly in European session. Still, US stocks futures point to more record runs today while yields are firm. We’ll see if the greenback to ride on the trend to resume near term rebound. Canadian Dollar is currently the stronger commodity currencies, as supported by oil prices. Sterling turns weaker after failing to break through a near term resistance level against Dollar.

Technically, GBP/USD appears to be backing off from 1.3758 resistance while EUR/GBP is extending recovery. We’ll see if EUR/USD could ride on this to break through 1.2052 support turned resistance decisively, to indicate completion of near term correction. 0.7703 minor resistance in AUD/USD will also be a level to watch. Break will argue that near term correction from 0.7819 resistance has completed and bring retest of this high.

Eurozone Sentix dropped to -0.2, EU economy losing touch with other regions of the world

Sentix said, “the EU order debacle and the resulting slower pace of vaccination are weighing on the mind and exposing the bureaucratic deficits in Euroland. As a result, the EU economy is losing touch with the other regions of the world, which are continuing their recovery course in the month of February.”

It also warned, “a permanent prolongation of the lockdown could become a problem because the difference between expectation and the current situation (the so-called expectation gap) is extremely high! There is a potential for a temporary disillusionment here. Fatal would be in any case a repeated demolition of the expectation component. The consequence would be a renewed recession.”

Also released, Germany industrial production was flat mom in December, below expectation of 0.3% mom. Swiss unemployment rose to 3.5% in January, above expectation of 3.4%.

Nikkei resumes up trend to 30-yr high, 30k handle next

Nikkei rose 2.21%, or 609.31 pts, to close at 29388.50 today, highest level in 30 years. The up trend from 16358.19 has just resumed. The index was contained well above rising 55 day EMA in the prior pull back, suggesting that some upside acceleration could be seen. Focus will be on whether daily MACD could break through the trend line resistance in next move, as well as the reaction to medium term channel resistance.

Gold recovers after hitting 1784, but outlook stays bearish for another fall 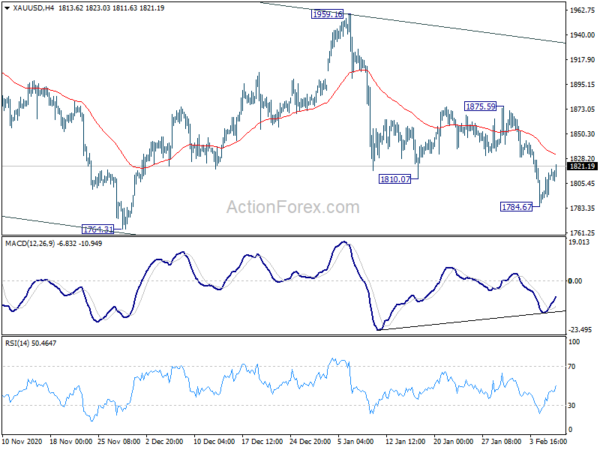 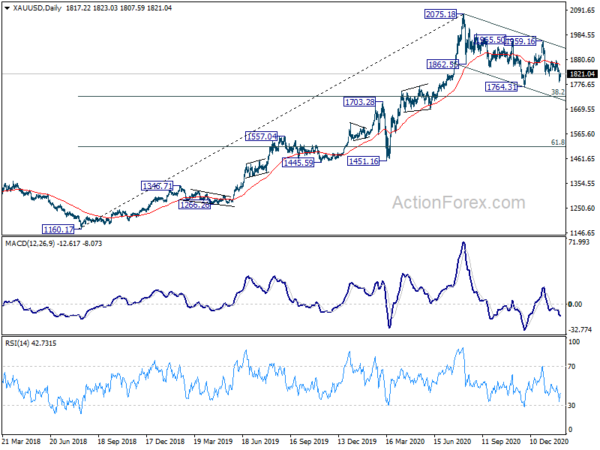 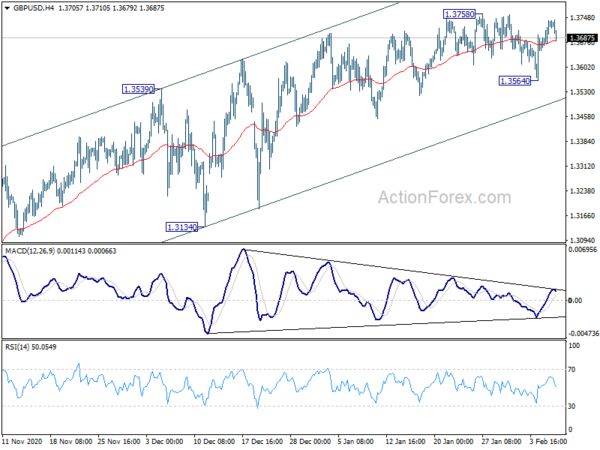 In the bigger picture, rise from 1.1409 medium term bottom is in progress. Further rally would be seen to 1.4376 resistance and above. On the downside, break of 1.2675 support is needed to indicate completion of the rise. Otherwise, outlook will stay cautiously bullish even in case of deep pullback. 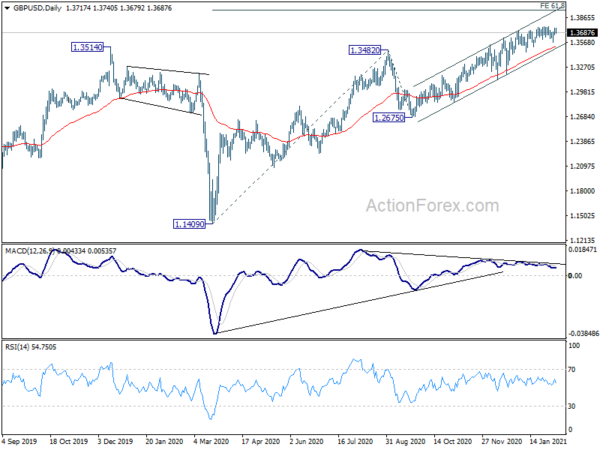 Sterling Retreats, Dollar Looks into Strong US Stocks and Yields