Sterling jumps sharply after BoE indicated that it didn’t want to send a signal to the market on adopting negative rates. Dollar is also firm on overall mixed market sentiments. Thanks to the selloff against both the Pound and the greenback, Euro is currently the worst performing one for the day, trailed closely by the Swiss Franc. As for the week, Kiwi and Dollar the the strongest ones, but Sterling has the potential to over taken them. Euro and Swissy are relatively unlikely to be displaced from the bottom places.

Technically, EUR/GBP’s downside acceleration is a clear bearish development, which could bring it to 0.8670 support soon. GBP/JPY is following to break 144.07 resistance to resume larger up trend. An immediate focus would be 1.3758 resistance in GBP/USD. The pair is staying well indicate near term rising channel despite this week’s retreat. Break of 1.3758 will confirm resumption of recent up trend too. That would confirm the broad based come back of the Pound.

BoE kept monetary policy unchanged as widely expected. Bate Rate is held at 0.10%. Total target stock of asset purchases also stayed at GBP 895B. Both decisions were made with unanimous votes.

The central bank pledged that, “if the outlook for inflation weakens, the Committee stands ready to take whatever additional action is necessary to achieve its remit.” Also, “the Committee does not intend to tighten monetary policy at least until there is clear evidence that significant progress is being made in eliminating spare capacity and achieving the 2% inflation target sustainably.”

Outlook for the economy remains “unusually uncertain”, depending on the “evolution of the pandemic, measures taken to protect public health, and how households, businesses and financial markets respond to these developments.”

In BoE’s economic projections, based on assumption of constant interest rate at 0.1%:

In the BoE minutes noted, “the Committee was clear that it did not wish to send any signal that it intended to set a negative Bank Rate at some point in the future”. Though, on balance, “it would be appropriate to start the preparations to provide the capability to do so if necessary in the future,””

“The MPC therefore agreed to request that the PRA should engage with PRA-regulated firms to ensure they commence preparations in order to be ready to implement a negative Bank Rate at any point after six months,” the minutes added.

UK PMI Construction dropped sharply to 49.2 in January, down from 54.6, missed expectation of 52.8. Markit noted the renewed down turn in commercial activity. House building recovery lost momentum. But purchase price inflation was highest since June 2018.

Tim Moore, Economics Director at IHS Markit: “The latest survey highlighted that construction companies have become more cautious about the business outlook. Output rebounded quickly after stoppages on site at the start of the pandemic, but hesitancy among clients in January and worries about near-term economic conditions resulted in a dip in growth expectations for the first time in six months.”

Eurozone retail sales rose 2.0% mom in December, above expectation of 1.3% mom. The volume of retail trade increased by 5.1% mom for automotive fuels, by 1.9% mom for food, drinks and tobacco and by 1.5% mom for non-food products (within this category textile, clothing and footwear increased by 12.4% mom).

According to Alan Oster, NAB Group Chief Economist “like many other indicators the survey shows that the economy continued to rebound strongly late in Q4. Optimism in the business sector continued to strengthen as the impacts of severe lockdowns faded”.

“What is even more encouraging is the fact that businesses have seen a strong rebound in actual conditions – particularly in trading conditions and profitability. This likely reflects the huge support provided to the economy by policy makers” said Oster.

Also released, trade surplus widened to AUD 6.79B in December, missed expectation of AUD 9.0B.

New Zealand ANZ Business Confidence rose to 11.8 in February’s preliminary reading, up from December’s 9.4. Own activity outlook rose to 22.3, up from 21.7. Looking at some more details, employment intensions rose to 10.6, up from8.8. Investment intentions improved notably to 17.8, up from 8.56. But export intensions dropped to 6.3, down from 10.3.

ANZ said: “We are forecasting wobble in demand in the first few months of this year as the true cost of the closed border for the tourism industry starts to become apparent. But it’s fair to say there’s not much sign of it yet, with the roaring housing and construction sectors filling the void, albeit fuelled by credit rather than foreign exchange earnings. Further monetary stimulus is looking less necessary by the week, and we no longer expect any more OCR cuts this cycle.” 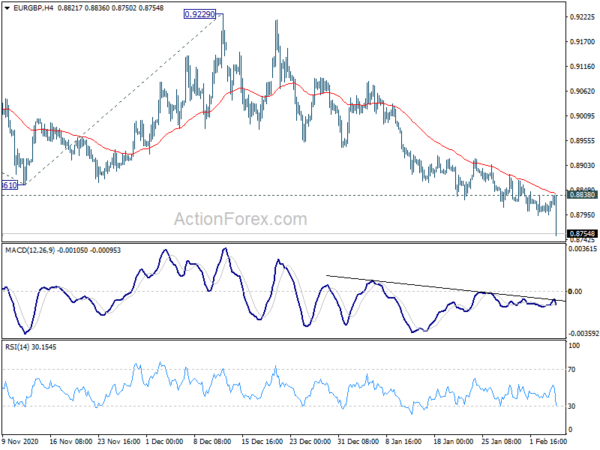 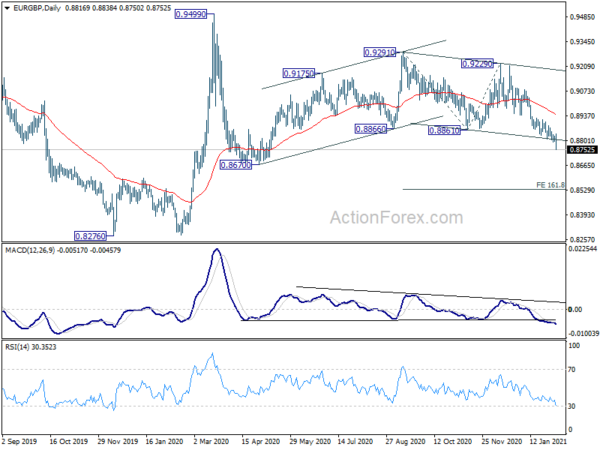