Dollar and Yen are currently the mildly strong ones this week so far. US stocks ended mixed as S&P 500 and NASDAQ made new record highs, but DOW refused to follow and closed lower. Asian markets are also generally in red. Australian and New Zealand Dollars are notably weaker today, while Sterling is trailing.

Technically, Sterling is looking vulnerable against Dollar and Yen for the moment. Break of 1.3859 minor support in GBP/USD and 153.07 minor support in GBP/JPY would argue that last week’s rebounds were completed. The pairs could then be heading back to 1.3785 and 151.28 support respectively. If that happens, we’d see if Euro would follow in EUR/USD and EUR/JPY too. 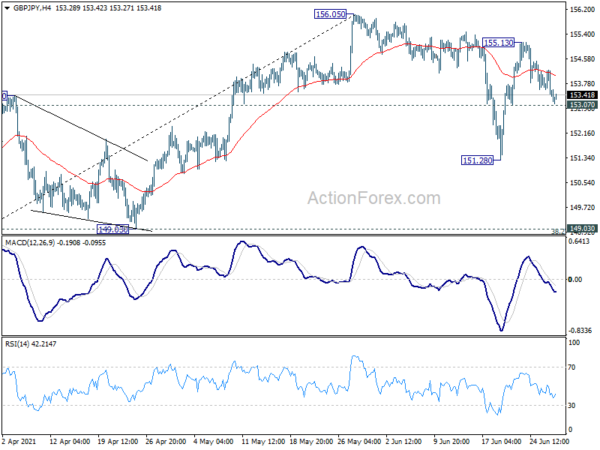 Fed Quarles: We’re not behind the curve on inflation

Fed Vice Chair Randal Quarles said that the current high inflation was transitory, due to supply chain imbalances and higher demand. He said, “if a year from now we were not to see inflation settling back down to something that’s closer to our 2% target… we have the tools at the Fed to then begin – as we traditionally would – to increase interest rates, to change our monetary policy in a way that would address that inflation.” He noted that “we’re not behind the curve”.

Separately, Richmond Fed President Thomas Barkin said, “it’s pretty clear to me we have had substantial further progress against our inflation goal”. “I’m pretty optimistic about the labor market. … If the labor market opens as I suggested it might, then I think we’re going to get there in relatively short order.”

“I kind of think let’s look at it next year and see what happens and if the numbers hit, great, if they don’t, we’ve got time because it will show there’s still more time for the economy to grow,” Barkin said.

RBNZ Governor Adrian Orr said in a Statement of Intent that economic activity in New Zealand is “returning to its pre-COVID-19 levels”, supported by “ongoing favourable domestic health outcomes, and improving global demand and higher prices for New Zealand’s goods and exports”.

“A catch-up in consumer spending and construction activity, supported by substantial monetary and fiscal stimulus is underpinning employment growth,” he added.

“As long as COVID-19 is contained and the global and economic recovery is sustained, eventually economic policy settings can be expected to normalize over the medium term.”

Intraday bias in GBP/USD remains neutral with focus on 1.3859 minor support. Break will indicate that fall from 1.4248 is likely resuming. Such decline is seen as the third leg of the consolidation pattern from 1.4240, and should target 1.3668 support and possibly below. On the upside, break of 1.4000 will turn bias back to the upside for retesting 1.4240/8 resistance zone instead. 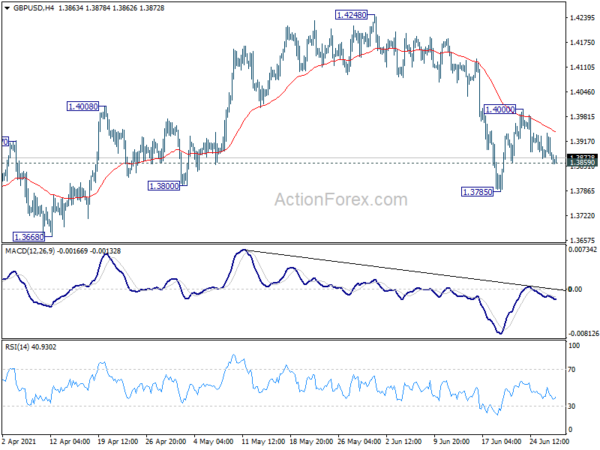 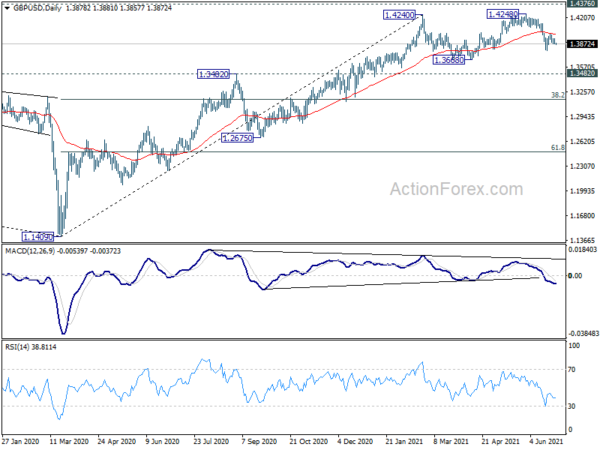 Swiss Franc Ended as Strongest, Aussie as Weakest, But Bitcoin Stole the Show