Yen and Swiss Franc dominates the markets for the day, as selloff in stocks spread from Asia to Europe, to US. Risk aversion intensified with DOW down over -800 pts in initial trading, while 10-year yield breaks1.2 handle. Canadian Dollar is the worst performing one, as WTI crude oil breaks below 70 handle. However, Australian and New Zealand Dollar are not too far away. The greenback is mixed for the moment, a touch weaker than Euro, but firmer against Sterling. We’d now see if US indices could bend upward before close. Or, the selloff would spillover back to Asian markets tomorrow.

Technically, one thing to note is USD/JPY’s break of 109.52 support, that resume the fall from 111.65. We’d not firstly see if USD/CHF would break through corresponding support at 0.9116 too. Additionally, we’d see if that would also result in EUR/CHF’s break of 1.0802 support. Or, EUR/USD could indeed ride on Dollar’s selloff and rebound through 1.1880 resistance. The interactions would be interesting.

BoE policymaker Jonathan Haskel said in a speech, “in the immediate term, the risk of a pre emptive monetary tightening curtailing the recovery continues to outweigh the risk of a temporary period of above target inflation. For the foreseeable future, in my view, tight policy isn’t the right policy.”

He also noted “two headwinds” oer the coming months, the “highly transmissible Delta variant” and a “tightening of the fiscal stance”. “Against this backdrop, risk management considerations lean against a pre emptive tightening of monetary policy until we can be more sure the economy is recovering in a manner consistent with the sustained achievement of the inflation target,” he said.

Bundesbank: German economic rose strongly in Q2, to be even stronger in Q3

Bundesbank said in the latest monthly report, “the German economic output increased strongly again in the second quarter of 2021.”

“Provided that there are no significant setbacks with a view to the pandemic and the supply bottlenecks in the industry at least gradually decrease, the overall economic expansion rate is likely to be even stronger in the summer quarter,” it added.

Canadian Dollar tumbles broadly today as dragged by risk off sentiments, as well as the fall in oil price. WTI is pressing 70 handle after OPEC+ agreed over the weekend to boost production by 400k barrels a day, reversing some of the pandemic production cuts. 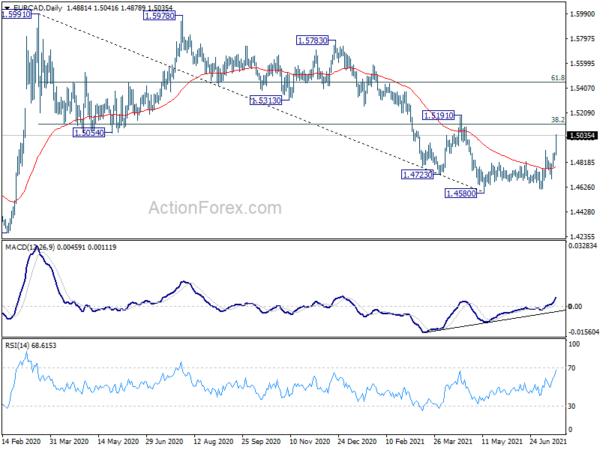 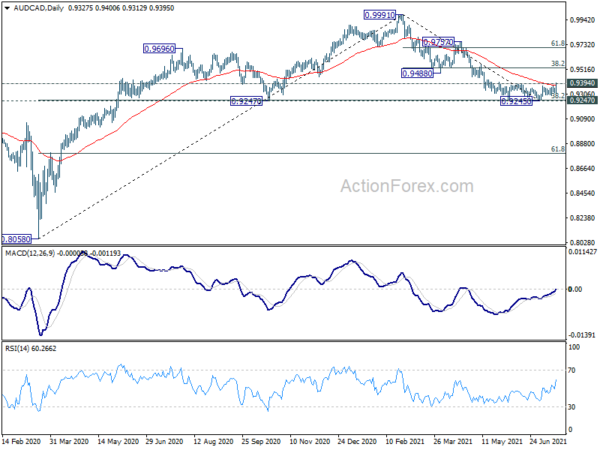 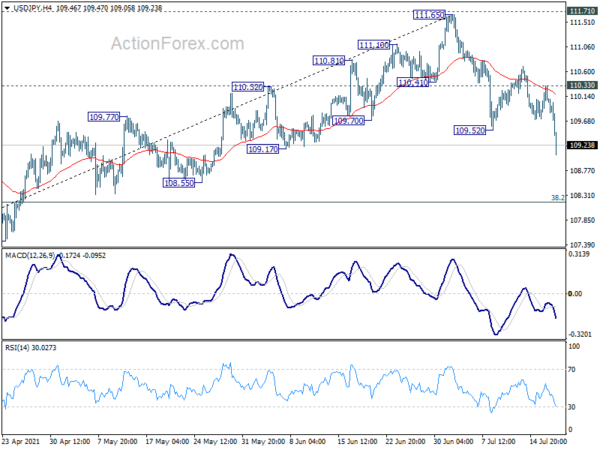 In the bigger picture, medium term outlook is staying neutral with 111.71 resistance intact. Sustained trading below 55 day EMA would argue that the pattern from 101.18 is starting another falling leg, that could head back to 102.58 support and below. For now, outlook won’t turn bullish as long as 111.71 resistance holds, even in case of strong rebound. 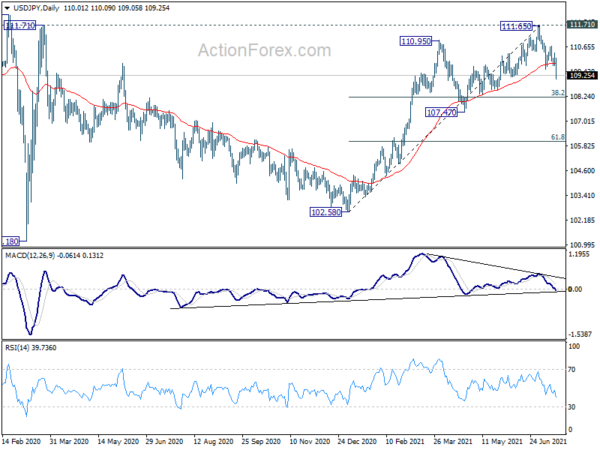