Yen trades mildly higher in quiet Asia today, while trading is also subdued in other markets. Sterling is trying to recover some of last week’s losses, but momentum is relatively limited. On the other hand, Swiss Franc and Euro are turning softer, partly due to retreat in crosses against the Pound. Overall, the economic calendar is very light today. Comments from Bundesbank’s Weidmann, BoE’s Haldane, and Fed’s Williams might trigger some jitters. But the big moves would likely come back in the week with the heavy weight economic data scheduled.

Technically, we’d maintain that Dollar’s retreat last week was weak and recent rebound is still mildly in favor to continue. EUR/USD, GBP/USD, USD/CHF and USD/CAD are all struggling to break through 4 hour 55 EMAs. We’ll keep an eye on the movements today and tomorrow, to see if, say, EUR/USD is heading back to 1.1846 temporary low. That might set up the stage for a breakout later this week on ISM and NFP.

BoJ: A virtuous cycle has started to operate thanks to vaccinations

In the summary of opinions of BoJ’s June 17-18 meeting, it’s reiterated that the economy has “picked up as a trend” although it remains in a “severe situation”. A “virtuous cycle” has “started to operate”, partly owing to the progress with vaccinations. The economy is “likely to recover” with impact of COVID-19 “waning gradually”.

Also, as vaccinations have been “progressing rapidly of late”, the economy is expected to “to a certain extent in the short run, mainly due to an expansion in pent-up demand for consumption of face-to-face services”.

Also, members noted that “until it becomes certain that the impact of COVID-19 has subsided, it is important to steadily continue with policy responses”. Financing of firms is “likely to remain under stress”. Face-to-face services consumption will be “constrained” and there remains a risk that “concern over financing will emerge”. Hence, it’s desirable to extend the duration of the Special financing program by six months.

Fed Rosengren: You don’t want too much exuberance in housing market

“You don’t want too much exuberance in the housing market,” he added. But “it’s worth paying close attention to what is happening in the housing market.” While he’s not saying that there will be a bust, “such cycles have occurred multiple times, a source of financial stability concerns.

Gold weakens mildly today but quickly recovered. Overall it’s staying in very tight range below 1796.64 minor resistance, and 1800 handle. Fall from 1916.38 is still in favor to continue. Such decline is seen as another falling leg of the whole corrective pattern from 2074.84. Break of 1760.71 temporary low will target 1676.65 support. We’d expect strong support from there to bring rebound, at least on first attempt. On the upside, break of 1796.63 will bring stronger rebound back to 55 day EMA (now at 1822.94).

The next move in Gold would be use to double confirm the next direction in Dollar elsewhere. 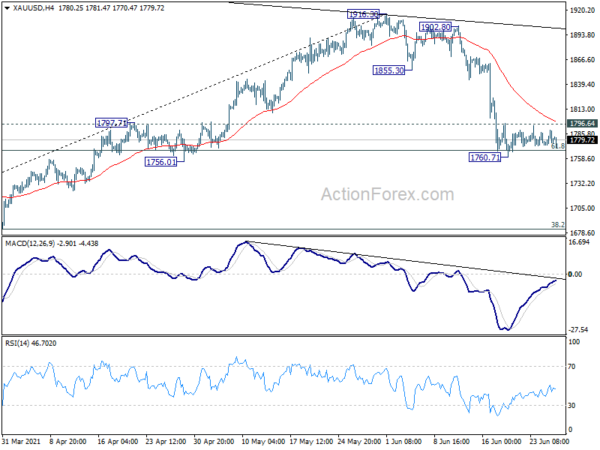 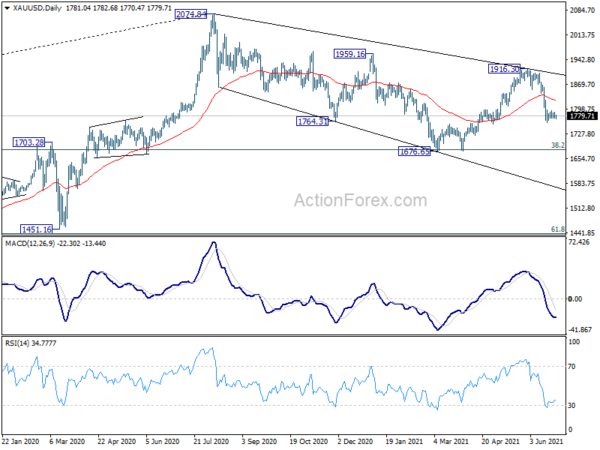 Focus will turn to economic data this week. In particular US ISM manufacturing and non-farm payroll employment will be mostly watched, to gauge the underlying momentum of the recovery. China PMIs, Japan Tankan survey will also be watched. Here are some highlights for the week:

EUR/JPY failed to sustain above 132.63 support turned resistance and drops notably today. But downside is contained above 131.21 minor support and intraday bias remains neutral first. On the upside, firm break of 132.63 should confirm completion of correction from 134.11. Intraday bias will be turned back to the upside for retesting 134.11 first. On the downside, below 131.21 minor support will extend the correction through 130.02. But in this case, we’d expect strong support from 38.2% retracement of 121.63 to 134.11 at 129.34 to bring rebound. 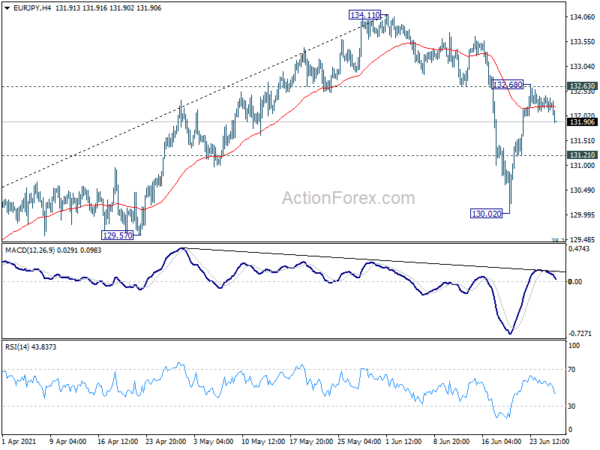 In the bigger picture, rise from 114.42 is seen as a medium term rising leg inside a long term sideway pattern. Next target is 137.49 (2018 high). Decisive break there will open up the possibility that it’s indeed resuming the up trend from 94.11 (2012 low). For now, outlook will stay bullish as long as 127.07 resistance turned support holds, in case of pull back. 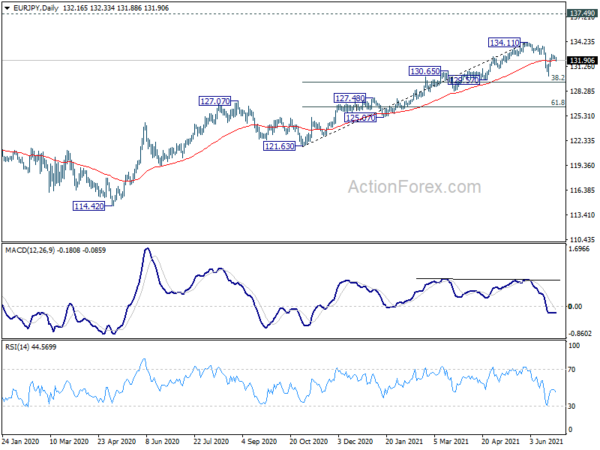